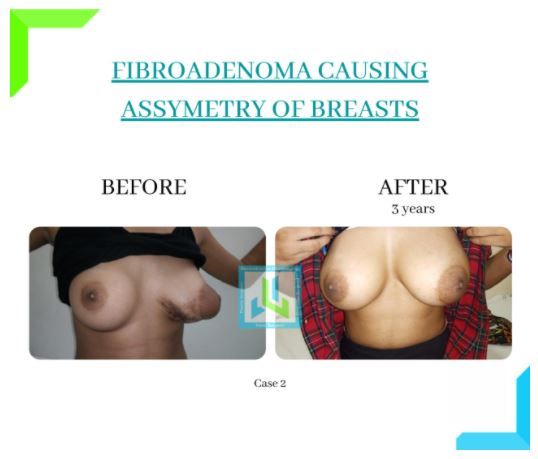 This young 14 years old girl presented with a lump in her left breast of one-year duration. She noticed it steadily in size. It had caused significant stretching of the areola on the affected side. It was a matter in concern as it grew rapidly to the size 10*8cms and caused a disproportionate increase in the size of the breast and the Areola.

She was then evaluated with an MRI scan to see the extent of the tumor. It was found to have two lobes and was extending deep into the breast. Her surgery was planned under General Anaesthesia.

The tumour was removed through a cut along the lower border of the stretched areola so as to leave no scars on her skin. Her breast tissue was then apposed to fill in the gap left after tumor removal. She had an uneventful recovery. Her biopsy confirmed the tumor to be a fibroadenoma.

As she grew up, her breasts grew with acceptable symmetry of the breasts and the areolae, with no scar visible. This young girl was quite satisfied with the overall aesthetics of the breast.

Timely surgery is essential to ensure that breast development is not affected because of a giant fibroadenoma.