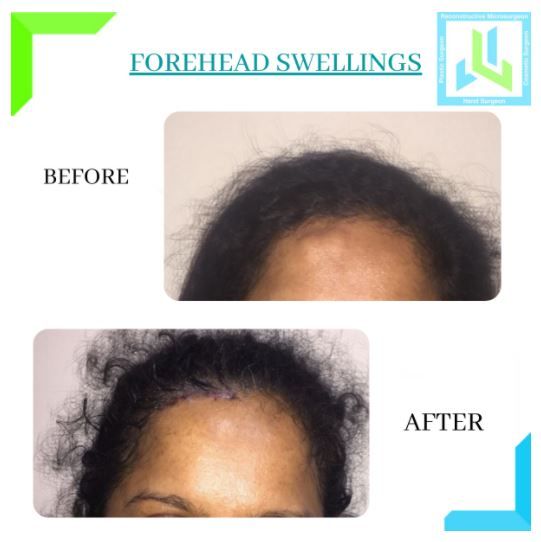 This middle-aged woman presented with the twin swellings that were evident in her forehead. They were not painful, felt hard and were slowly increasing in size such that they were conspicuous in every photograph!

Once she was counselled about surgery, she readily agreed for the same.

Very commonly people have one but often two swellings on the forehead, usually females. They are bony hard swellings arising from the forehead bone and called Osteomas.

They are small in size like marble, hard and remain more or less the same sized. Commonly starting in mid- ’30s, they are painless and cause no other issues except that they are quite obvious on the forehead and stand out in every photograph!

No chance of recurrence!!!

Yes, one can get rid of these swellings by Surgery! It's a simple daycare surgery that can be done under local or general anaesthesia, there will be NO SCAR on the forehead as it will be concealed in the hairline. The excess bone is shaved off the underlying forehead bone.

Her photographs now show a bump-free and scar-free forehead!

Q. Hello Dr, I am Soumil. I want to know what foods should I avoid before going plastic surgery? can you please suggest me??

Avoid high-fibre foods of any kind within 24 hours of any surgical operation involving anaesthesia, including fruits, vegetables, legumes, nuts, and whole grains. You should avoid eating fish or taking fish oil or omega-3 supplements for the two weeks coming up to surgery. For more information, you can book an appointment with Dr Leena Jain.